TDD, or Test Driven Development, is the concept of writing a series of assertions in a test file BEFORE writing any of the applicable code that supports the tested functionality.

The main benefits of writing tests are:

Some very minimal downsides of TDD are:

The main benefit of Test Driven Development is that you are forced to look at the problem you are solving at a high level and not worry about the little details for implementing your solution.

For example, if you are writing a test for a function, you focus on the scenario: for a given input to the function, what is the expected output? The test does not care what exactly happens within the function as long as the output is what is expected.

What Should Be Tested?

When talking about what should be tested, we say that we want to test the outcome or result of a particular piece of code execution. This is an important distinction and can help clarify one of the key pieces of what makes testing hard.

For example, let’s say we have a quiz application that checks a user’s answers and adds/removes points from their score:

What would we want to verify about the checkAnswer method? What should this method do?

For now, we’ll focus on the testing framework Mocha, along with an assertion library called Chai.

Mocha is a testing framework that runs on Node.js in your terminal, and can also be run in your browser window.

Mocha itself is the framework that runs the tests and dictates the syntax of the test block as a whole. This is separate from the assertion library Chai that we will talk about in a minute.

First, lets look at the syntax provided from Mocha:

The code above simply indicates that we want to test a piece of functionality that is associated with unicorn. In English, we want to test that eating accumulates calories. You’ll write the code above with any framework, but nothing is actually being tested yet. This is where we need to pull in something called an assertion library. Most testing frameworks provide the tools to run your tests in Node, or your browser, but the specific syntax for what you are verifying is true (aka “asserting”), can be done lots of different ways.

An assertion is the crucial piece of the test that actually checks that when certain pieces of are code are executed, what we’re getting back is what we expect.

In english, here are a few examples of things we might want to assert:

If you think of each of these simple english sentences, the “assertion” piece is the part in bold. In that last example, in other words, after I create a unicorn and it eats three times, I want to assert that its calorie count is EQUAL TO 300.

The assertion library we are going to use today is called Chai. Chai can be inserted into many different testing frameworks, but it works seamlessly with Mocha which is what we’ll focus on today. Before we get back to our tests, lets look at some of the syntax options Chai provides:

You’ll notice that Chai provides three different interfaces that accomplish the same task - as a developer you can choose which version feels best to you. For today we are going to go with the Expect API.

Structure of a Test

(Most tests you write will not need the Tear Down phase, but it’s good to know that step is there sometimes)

All of these phases deal with the Subject Under Test (SUT, or just subject).

Look at the following example and read the comments that talk about each line of our test:

To practice, let’s kick off a small project to demonstrate how you would utilize Mocha and Chai to write a couple tests.

In your terminal, clone down this starter repo and run npm install:

Let’s look at the tooling we have in place already - go to the package.json file!

We already have two files in place for us: /src/Box.js and /test/Box-test.js In our test file, we need to require our assertion library: chai.

Let’s practice writing a couple tests in true TDD fashion - this first one will just help verify that everything is wired up correctly - plus it’s always nice to start with an easy win.

If you run npm test now, you’ll see an expected error. It’s important to recognize this error, because it will happen a lot. Mocha and Chai are two different libraries - which is indicated by this error message:

It’s saying that it doesn’t know what expect is, and recall that expect comes from the Chai library. At this point we haven’t told our file to care about Chai, nor have we told it which API we want to use (remember Chai lets us choose between different assertion styles: should, expect, or assert).

Require Chai and the expect library, at the top of your test file:

If you run npm test now, we should have a passing test.

Obviously this test isn’t doing anything helpful, but we know our files are wired up. Let’s add some more interesting tests. Let’s pretend we just received a spec, and the first iteration looks something like this:

Let’s write some unit tests that pick apart each individual piece of functionality for this iteration. Notice that we are now also bringing in our primary Box.js file and assigning it the variable Box.

We will work through the TDD testing cycle we mentioned earlier: Red-Green-Refactor.

Run the tests and watch them fail (RED).

Take a minute to make those tests pass WITHOUT LOOKING AHEAD. Here’s a picture of some capybara so you aren’t tempted to look at the answer first. 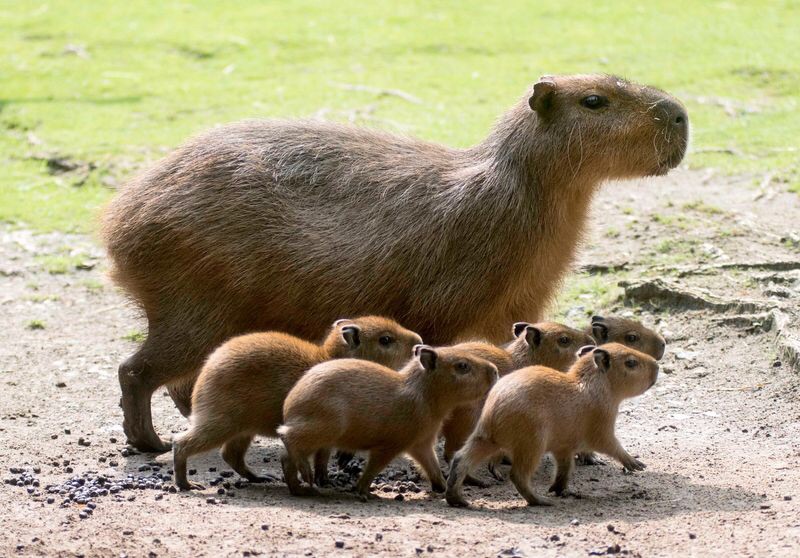 Look at the implementation of the Box.prototype.area() function as its written in the code snippet above. It works, and it was helpful to be super verbose on a first pass, but its pretty ugly. Now that we have a test to watch for functionality, we can refactor that code to clean it up.

Run npm test again to make sure we didn’t break anything. (REFACTOR).

SWEET! There we go with the first cycle of our RED-GREEN-REFACTOR TDD approach.

Implement iteration 2 for our box per the spec outlined below.

Implement iteration 3 for our box per the spec outlined below;